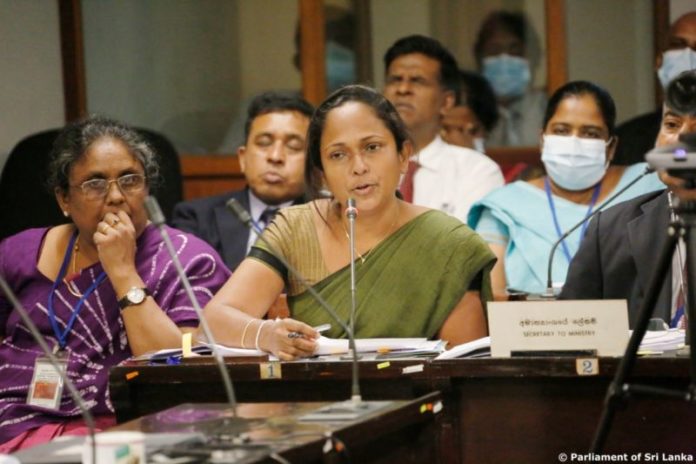 The Committee on Public Accounts (COPA) recommended that all Ministries should unite and set up a Cabinet Sub-Committee on Food Security to address the food crisis in the country. The members of the committee pointed out that it is important to set up this committee to bring all the agencies responsible for tackling the current food crisis together, to take quick decisions, to follow up on the actions to be taken and to discuss future actions.

The decision was taken at a meeting of the COPA Committee chaired by Hon. (Prof) Tissa Vitharana, Member of Parliament recently (10). Discussions were also focused on obtaining the support of SAARC Food Bank and the World Food Program (WFP) for Sri Lanka in overcoming the food crisis.

The Chairman of the COPA Committee elaborated on the unaffordable increase in the prices of essential food items due to the Government’s deregulation of food prices in the country. The Chairman of the COPA Committee also directed to look into the possibility of supplying food items at reasonable prices with the intervention of the government as the food items available in the market are expensive. Accordingly, the possibility of catering to low-income families through the Food Commissioner’s Department, Lanka Sathosa, State Trading Corporation (STC) and Multi-purpose Cooperative Societies was also discussed.

The Auditor General pointed out that food production has been severely hampered by climate change, the war in Russia and Ukraine, the crisis in world wheat, maize and fertilizer production and rising oil prices. In the local context, the production of essential food items has declined due to the recent fertilizer crisis in Sri Lanka, the shortage of foreign exchange reserves and the emergence of a policy crisis regarding the use of pesticides. According to data from the Sri Lanka Customs and Hector Kobbekaduwa Agrarian Research and Training Institute, the Ministry of Commerce has identified sixteen types of food as essential food items. They are Samba rice, Nadu rice, raw rice, sugar, red lentils, wheat flour, big onions, potatoes and canned fish, milk powder, dried sprats, dried chilies, chickpeas, chicken, fish and eggs.

The officials briefed on the quantity of essential food items produced in the country during the Yala and Maha seasons this year and the quantity of food required to meet the demand of the country. The Secretary to the Ministry of Agriculture pointed out that the committee set up under the new government under the chairmanship of Hon. Nimal Siripala de Silva will be met at the Prime Minister’s Office. He added that the Ministry of Agriculture has formulated an official plan of action on how to meet the carbohydrate, protein and other energy needs of the country by next January. The Secretary said that it will be sent via email for the information of all Members of Parliament.