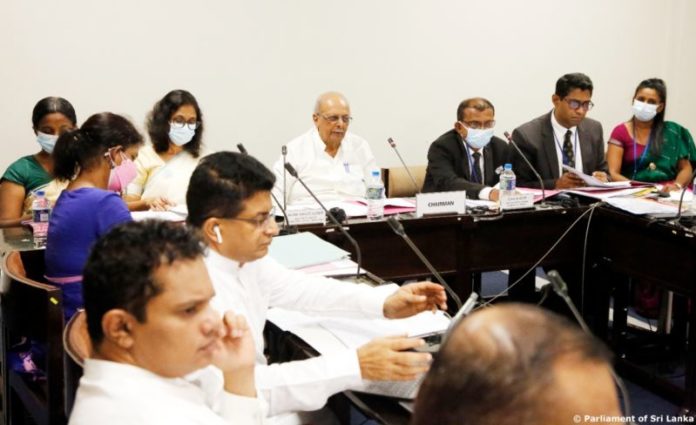 The Committee on Public Accounts held recently (08) drew special attention to the quantity of ethanol imported for use in Sri Lanka and the lack of proper regulation of importing institutions.

The Import and Export Control Department officials were instructed to submit a report to the Committee within two weeks containing the procedure for issuing licenses for the importation of ethanol into the country by various companies, information on each of these companies and the quantity of ethanol imported by those companies. It was also emphasized that the quantity of ethanol imported for other products, including pharmaceuticals, other than alcohol, and the proper use of ethanol for those products should be taken into consideration.

Furthermore, the Committee inquired into the issuance of licenses for the importation of vehicles and spare parts to Sri Lanka. Although it had previously instructed to take the necessary steps to formulate a proper procedure in coordination with the Department of Motor Traffic, the Committee expressed its displeasure that no action had been taken in this regard. In addition, it was further requested that a suitable methodology be prepared to maintain the relevant activities in a more efficient and transparent manner and submit to the Committee within a period of 04 months.

The Committee also noted the lack of a standardized computer system to carry out the activities of the Department of Import and Export Control.

The Committee pointed out that the lack of proper coordination with the Direct Liaison Institutions such as the Excise Department, the Department of Motor Traffic and the Sri Lanka Customs is very problematic in conducting the activities of the Department and was instructed to take the necessary steps to do computer networking immediately.

To this end, the importance of liaising with institutions such as the Information and Communication Technology Agency of Sri Lanka (ICTA) and the Telecommunications Regulatory Commission was also emphasized.

Although the officials of the Department of Import and Export Control were informed about this matter in the year 2016, the Committee expressed its displeasure that this work has not been done so far and considering the importance of this, the Chairman of the Committee decided to appoint a Sub-Committee to inquire into its progress. Also, attention was drawn to the subsequent transfer of vehicles imported under the prize scheme to various parties. Accordingly, after the vehicles were imported under the gift scheme, the officers present were asked about the transfer of the vehicles to other parties.

The officials informed the Committee that the vehicles so imported on a tax concession basis could not be transferred to another party until 05 years have elapsed. They stated that even after 5 years of such transfers, the necessary procedures have been put in place to recover the normal tax value of the relevant vehicles.

The Committee also emphasized the importance of proper follow-up and regulation of licenses for vehicles imported under the gift scheme.

The Committee inquired regarding the loss of customs duty of 114.6 million rupees due to incorrect customs associated classification numbering of 33 used cars in the year 2017 contrary to the provisions of Gazette Notification No. 1933/13 dated 21st September 2015, Gazette Notifications for Vehicles subject to Licensing Control and Instructions given by the Minister of Development Strategies and the Minister of International Trade and the Minister of State to the Controller of Imports and Exports. It was also informed that the full investigation has been handed over to the CID. The Chairman of the Committee instructed to submit a report on its progress to the Committee within 02 weeks.

The Committee also discussed the report of a special audit to study the reduction in the excise duty on a kilogram of sugar from Rs. 50 to Rs. 25 cents and study and the Committee also recently discussed the report of the special audit report to study the non-receipt of the expected relief by the consumers by reducing it to 25 cents. It was further emphasized that the introduction of a licensing system for the importation of sugar and the failure to introduce the criteria required to control the import of sugar and the loss incurred by the government due to the delay in issuing licenses will be taken up for discussion in the Committee on the 21st of this month.