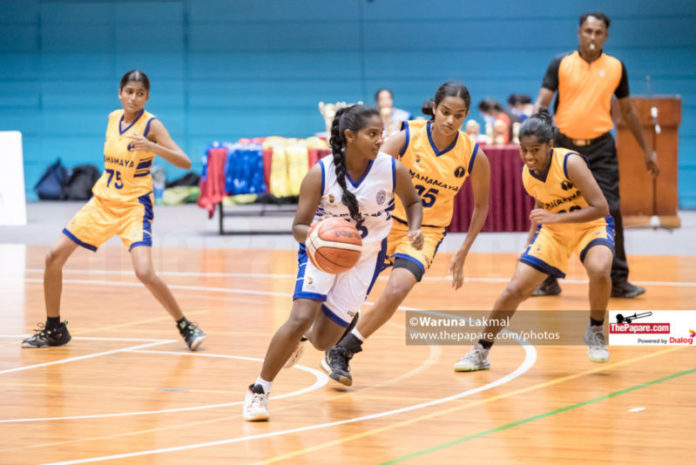 By M.H.Yakeem
Shonali of Holy Family Convent  Bambalapitiya selected for the Sri-Lanka Basketball Federation pool.
17 year old Shonali Dharmasena,  a student of Holy Family Convent Bambalapitiya has proved her talents in basketball and has been chosen to the Sri-Lanka Basketball Federation pool for the Commonwealth games this year.
She is the Vice Captain of the under 20 Champion team which took part in the Schools division  1 All Island tournament and also represented HFC  Blues in the 53rd  Senior Nationals tournament,  where they emerged runner-up.  Last year Shonali was selected to represent the 3 X 3 men/ women Sri-Lanka team for the FIBA under 18 World championship held in Hungary.
Shonali following her grand mother,’s  footsteps,  as she too  was a  versatile sports woman,  where she had the distinction of Captaining the Netball and Volleyball teams of Sri-Lanka in 70’s  and was  recognised as a double international and she also excelled in sports such as Badminton,  Basketball,  Football and Athletics is an old girl of Government Cenral College Miniuwangoda and the College has to proud of her achievements today.
Her grandmother, Sophia Dharmasena  had the honor of representing the Sri-Lanka Netball team for the first ever inaugural World tournament held in 1963 , which was staged in England   and  this team was victorious against Northern Ireland and Wales. She was appointed as the Captain of  the  Sri-Lanka Netball  team  in 1970 and the Volleyball team in 1973 .
Shonali’s father,  Kishan and uncle Suranjith Dharmasena  are famous Cricketers,  who played for Thurston College and division 1 club Cricket for NCC and  Tamil Union respectively and  presntly participates in the ongoing 50 plus Masters tournaments .
Sophia Dharmasena will now like to see her grand daughter following her footsteps , where her son Suranjith  represented  the Sri-Lanka schools under 19  Cricket team against the visiting Australia team in 1984  and also the  50 plus  Masters World Cup tournament held in South Africa two years back and this tournament  was abandoned  due the Covid 19 virus and this is an  unique feat created  by this family,  representing Sri-Lanka in different fields of Sports from generation to generations  .