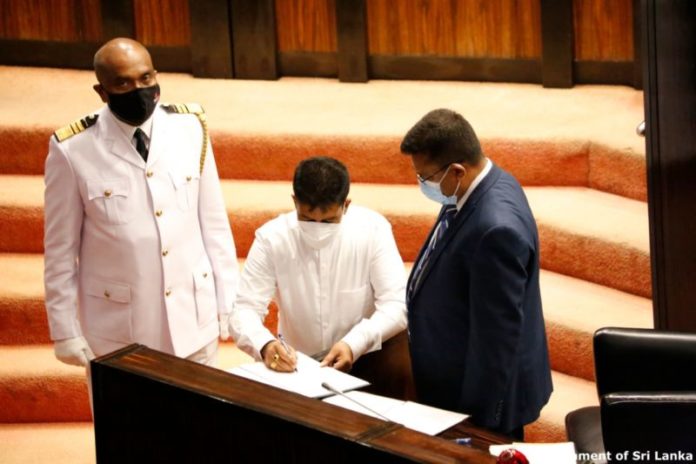 After being sworn in before the Speaker, he signed the Member roll kept before the Secretary General of Parliament Mr. Dhammika Dasanayake.

A vacancy occurred in the membership of the Ninth Parliament by reason of death of the Polonnaruwa District Parliamentarian Hon. Amarakeerthi Athukorala, representing the Sri Lanka Podujana Peramuna. Accordingly, Hon. S. Jagath Samarawickrama was declared elected as a Member of Parliament for the said electoral district under the Gazette issued by the Election Commission on the 17th. Thus, Hon. S. Jagath Samarawickramawas was sworn in as a Member of Parliament of the Ninth Parliament.

Hon. S. Jagath Samarawickramawas is a past pupil of Kaudawa National School, Moneragala and Siripura Central College. He served as the Chairman of the Dimbulagala Pradeshiya Sabha from 2008 to 2015. He is also currently the Chief Organizer of the Dimbulagala Welikanda Degodapattuwa Sri Lanka People’s Front. He, who was a candidate representing the Sri Lanka Podujana Peramuna at the previous General Elections   was fifth by number of votes from Polonnaruwa district.