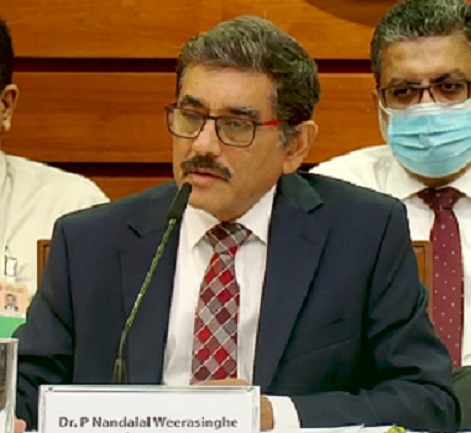 Sri Lanka’s domestic and foreign creditors who can apply to receive suspended debt repayments in rupees under an interim policy, could also be paid in bonds as an alternative, Central Bank Governor, Nandalal Weerasinghe said.

Under Sri Lanka’s debt suspension policy, interest and principle payments will be capitalized at the applicable interest rate until a restructuring arrangement is finalized. The Finance Ministry has also offered to issue a new debt instrument to those who ask.

“Any external creditor or a domestic holder of ISBs – those will be under re-structuring anyway – if the domestic one or foreign investor want rupees, we said there is an option,” Weerasinghe said.

“For example if a foreign investor wants to collect rupees and invest in the stock market there is an option,” he also said.

Out of 13,050 million dollars of international sovereign bonds outstanding at the end of 2021, 1,859 million was held by domestic holders. In a 500 million dollar bond that was repaid in early 2022 about 117 million was estimated to have been held domestically.

Most the debt is held by Sri Lankan banks.

“This is also a request coming from the domestic banking sector as well. There are some domestic banks who have invested in the secondary market, this is a more appropriate option for them. At that time they can take rupee at the value of the prevailing exchange rate,” Mr. Weerasinghe said.

The debt policy said the payments would be paid in rupees as long as it was ‘feasible under the relevant credit documentation’ and was ‘consistent with the central bank’s monetary policy’.

If large amounts of money are paid out by overdrawing commercial banks (which leads to a reserve short which is are then filled with central bank re-finance) or direct central bank credit, the new liqudity can further destabilize the exchange rate.

Paying out in the form of a paper security avoids the risk.

“First we will have to see whether there are holders of ISBs who are willing to take that option. If they are willing to then the next consideration is whether the government can transfer the funds immediately or give a bond. That is something that can be considered later,” he also said.

Creditors who wish to receive rupees have to inform the Finance Ministry within one month of the defaulted payment.