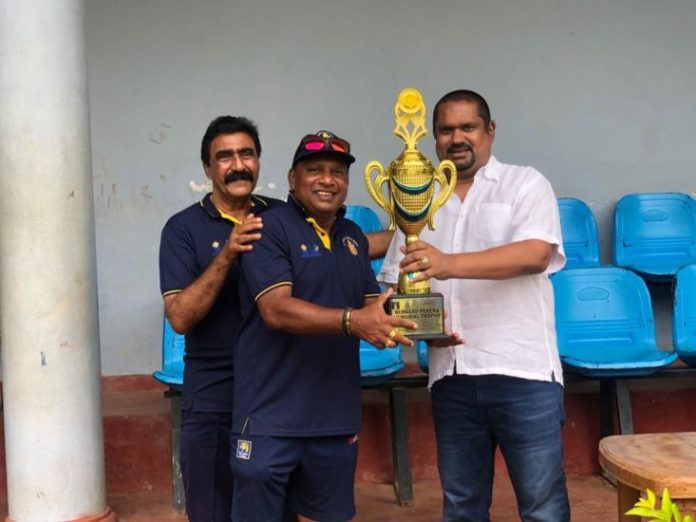 By M.H.Yakeem
Lanka Cavaliers  in a thrilling win
In a keenly contest match,  Lanka Cavaliers beat Old Anthonian’s kandy by a margin of 6 runs in their Masters 30 overs Cricket encounter,  played for the Bernard  Perera Memorial Trophy at kandy recently.
Lanka Cavaliers batting first,  openers Wasanthalal Fernando and Sujith Perera putting up a 34 runs partnership and with the dismal of Wasanthalal Fernando , Suranjith Dharmasena joining Sujith Perera got the score board ticking with a 88 runs partnership for the second wicket and after a gallant knock of 51 runs,  Sujith Perera decided to retire and Suranjith Dharmasena a capable batter , who is in form took up the bowling attack and  played a splendid innings to score a  well compiled 49 runs not out ,  falling short of a well deserving half century.  Chintaka, Suresh and Asela Herath  shared the bowling honors with a wicket each.
In reply  ,  Old Anthonian’s lost 2 early wickets at the score at 39 runs on board,  but Indika Fernando and Suresh , scoring 20 runs and  35  runs respectively took the score to 88 runs and with the dismal of these two batters and other wickets falling at regular intervals , Chintaka Giirihigama stayed till the end , playing a magnificent innings scoring 24 not out,   yet they fell short of targett to the fine bowling performance of stalwart Sirosha Gunathilake,  who was introduced in the last couple of overs captured 2 vital scalps and was well supported by Niranjan Dabare , who also claimed 2 wickets. Renuka Nonis , Krishan Dharmasena and Mahesh Wijenayake  got 1 wicket each.
Lanka Cavaliers    –  141 /3 in 30 overs
Wasanthalal Fernando  17, Sujith Perera 51 rtd hurt , Suranjith Dharmasena 49 not out
Old Anthonian’s  –    135 /7 in 30 overs
Siriwardena 16 , Suresh  35, Indika Fernando 20, Chintaka Girihagama 24 not out
Sirosha Gunathilake 2 / 19, Niranjan Dabare 2 / 21
Beat Batsmen   –  Suranjith Dharmasena
Best  Bowler     –   Sirosha Gunathilake
Best  fielder      –   Sampath  Wickramarachchi
Man of the match  –  Sujith Perera ,