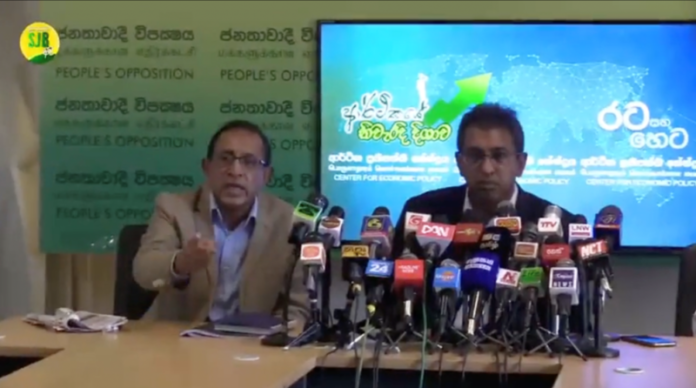 Currently, Sri Lanka is in the midst of a crisis of confidence. Public confidence, as well as international investor confidence in this government has completely fallen, and as a result markets have frozen. Basic economic theory states that the main factor determining the efficiency of a market is confidence and with this in mind this government is clearly unable to manage the economy any further. We appeal to the government to present the IMF letter, as it will regain some lost investor confidence by displaying willingness to work with the IMF and in implementing a sustainable plan.

There are a few changes that the government ought to implement immediately. Beginning with the complete overhaul of the monetary board of the Central Bank of Sri Lanka (CBSL), as confidence in the current board is destroyed. We are facing this current crisis, as a result of ill decisions made by the monetary board. The manner in which they floated the rupee was completely wrong. The Finance Minister, Basil Rajapaksa stated that they were a hold of the final IMF Article IV report, however, they seem to have missed the second page. One of the main suggestions on the second page states that the devaluing of the rupee should happen gradually. Thereafter, “transition should be carefully sequenced and implemented as part of a comprehensive macro-economic adjustment package”.

The CBSL’s forced conversion of remittances is completely regressive and needs to be scrapped. They floated the rupee while the forced conversion rate was at 25%, however, when they witnessed remittances flowing through the banking system again, they further increased the rate to 50%. As a result of these unsustainable conversions, banks now have insufficient forex to conduct their business. The banks pay our import bills, whether it is for fuel, medicine, potatoes or LPG, not the CBSL. Therefore, it is crucial that the banks have sufficient dollars to purchase goods, as well as prevent further depreciation of the rupee. We can neither comprehend these absurd policies, nor will we stand for them, and the government needs to immediately withdraw this gazette.

Furthermore, the Article IV report highlights the importance of observing the economy as one coherent system, in which we have to look at all variables when implementing reforms, as opposed to just one variable. It is of utmost importance that we further increase the policy interest rates, as an increase from 6.5 % to 7.5% is wholly insufficient! Take for example, yesterday at the treasury bond auction, the government did not approve any of the bids submitted by the market, thus they had to print the equivalent for funding. The Central Bank states the reluctance to approve any bids is a result of all bids being made for an interest rate above 15.5%. However, what the CBSL fails to understand is that no one wants a negative interest on their investment. Thus, when inflation is at 17.5 %, who in their right mind would invest in anything for an interest rate below 17.5%? All investors strive to

achieve an interest rate above the inflation rate so that they can reap a good return on their investment. This is why we urge the government to increase the policy interest rates in line with the rate of inflation and completely abandon the excessive printing of money.

Additionally, the process of debt-restructuring needs to start as soon as possible. Our creditors have already hired top law firms such as White & Case LLP to advise them on debt negotiations and plan to take us to courts. However, we are yet to hire a law firm to represent us. We urgently need to hire appropriate lawyers, although I urge the government not to see this as an opportunity to steal more. In the recent past, we witnessed the current Governor of the Central Bank engage in shady deals, with characters such as Imaad Zuberi, amounting to $6.5 million. Since then Zuberi has been convicted and sentenced to imprisonment on multiple counts of financial fraud in the United States. It was also later revealed that over $5.6 million of our taxpayers’ money went to the benefit of Zuberi and his spouse. Moreover, it is critical that we temporarily halt interest payments on International Sovereign Bonds (ISB), as a first step in the process of debt-restructuring.

Yesterday, I met a group of fund managers representing various bondholders. It was inconceivable to me when one fund manager revealed that he met with President Gotabaya Rajapaksa. It is completely improper that the President would allocate time for fund managers. Instead, we need to be represented by a team of experts on sovereign-debt restructuring and not the President of Sri Lanka. The President neither has the necessary capacity nor the capability to restructure bonds, which is why we urge the government to hand over the sovereign-debt restructuring negotiations to professionals.

Lastly, we hear that the government is to amend the previous expenditure and revenue and present a new budget. If so, the government needs to clearly state how they will reduce expenditure while increasing revenue in order to regain some sort of market confidence. The public is in complete disarray today, as queues for fuel and gas extend over kilometers , and people continue to suffer from power cuts that last as long as 13 hours, putting both businesses and peoples’ livelihoods in jeopardy. We strongly urge the government to implement necessary changes and reforms so that we can carve a clear and sustainable path to get Sri Lanka out of this mess, which is largely due to bad governance. We will continue to provide constructive criticism and suggestions to the best of our abilities, as we need to salvage this country for future generations.