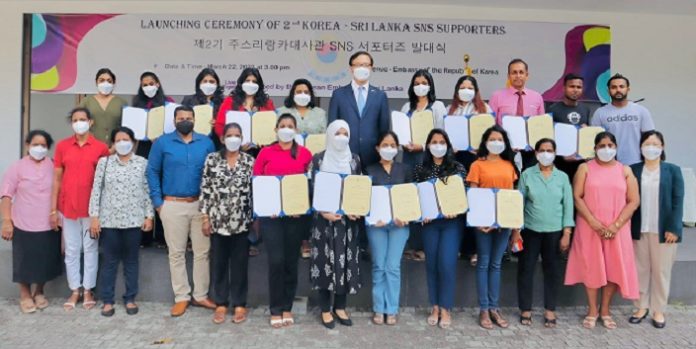 Korean Ambassador Santhush conferred certificates of appointment to SNS supporters and congratulated them for being a part of the Korea – Sri Lanka family. He also emphasised on the vital role of SNS supporters to bridge people to people-to-exchanges and cultural relations between Korea and Sri Lanka.

He stated, “Congratulations to all of you for being selected as the official Embassy Korea-Sri Lanka SNS supporters for 2022. I am happy to welcome you all at the Korean Embassy as new members of the Korea- Sri Lanka SNS family. Promotion of cultural exchange is central to the work we do at the Korean Embassy. As we embark on the 45th anniversary of diplomatic relations, please join with us and extend your cooperation to successfully celebrate this meaningful year together”.

Ms. LIM Soyeon, Second Secretary in-charge of Cultural and Educational affairs at the Korean Embassy also elaborated on the role of an SNS supporter in promoting K-pop, K-dramas and Korea related content.

Through this programme, the SNS supporters are not only given an opportunity to learn about the history, cultural heritage and development story of Korea but also given a mission to create awareness among Sri Lankans about the various activities organized by the Korean Embassy for the mutual benefit of both countries. Korea prioritises people-to-people exchanges as an important pillar in its bilateral relations with Sri Lanka and SNS supporters play a vital role to foster strengthened ties between the two countries.

The Korean Embassy is humbled by the love and appreciation shown by many Sri Lankans for Korean culture including K-pop, K-dramas and Korean cuisine, and hopes that Sri Lankans friends of Korea will continue to support cultural events organised by the Embassy online and offline.