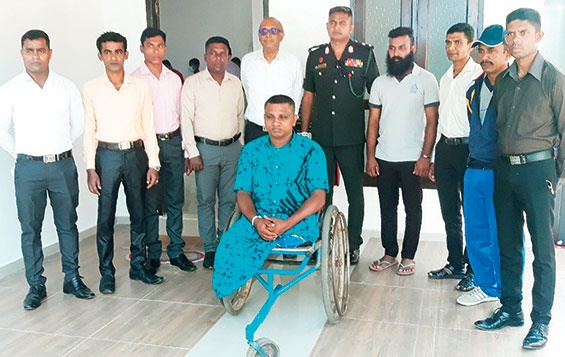 It is more than a decade since the end of the conflict that lasted for over a quarter century. Many sacrificed their lives and some their limbs to save our motherland. Unfortunately, many war heroes are now forgotten.

Against this backdrop, Sergeant J. M. A. S. Jayasundara (Ajith Malli) of the 6th Gemunu Battalion, a resident of Imakadura, Meegahakiula Aravapara, who lost both his legs during a LTTE attack in 2008 was recently the happy recipient of a brand-new house.

The house was donated by Sanjeewa Jayaweera in memory of his brother Rajeewa Jayaweera who passed away under tragic circumstances nearly two years ago.

The house was built under the coordination of the Lieutenant General Denzil Kobbekaduwa Trust Chairperson Lali Kobbekaduwa and the labor contribution was from the Gemunu Watch Regiment.

Speaking on the occasion, Sanjeewa Jayaweera’s wife Deepthi said: “This house was built to commemorate my husband’s brother Rajeewa. For quite some time we were looking for a deserving person and was fortunate to have met Mrs. Kobbekaduwa who quickly identified the recipient along with the Gemunu Watch Regiment. The Commanding Officer of the Regimental Headquarters Battalion, The Gemunu Watch Lieutenant Colonel Sanjeewa Samaranayake and other officers made a great contribution towards the construction of the house. We sincerely thank all who were involved from the commencement of the project to the handover of the house in a very short period to this war hero”.

She also said, “It was because of the efforts of our brave soldiers that we were able to end the war that lasted for nearly three decades. Many lost their lives as well as some their hands, feet, and eyes. In such a scenario, we consider it a great privilege to have built a house for a young man who was grievously injured and make his dream of owning a home come true”.

Sergeant Jayasundara said, “Today is a very special day for me. It has been a very frustrating time for me. I lost both my legs during the humanitarian operation in Mannar. For years since then, I have suffered mentally as well as physically. However, I would like to take this opportunity to thank Mr. Sanjeewa, who built a house for me when I was homeless, and to the Chairperson of the Lieutenant General Kobbekaduwa Foundation and all those who contributed to the construction of this house, including the Commanding Officer Regimental Headquarters Battalion of the Gemunu Watch”.

At the end of the ceremony, Sanjeewa Jayaweera also presented gifts to those from the Gemunu Watch who were involved in the construction of the house.